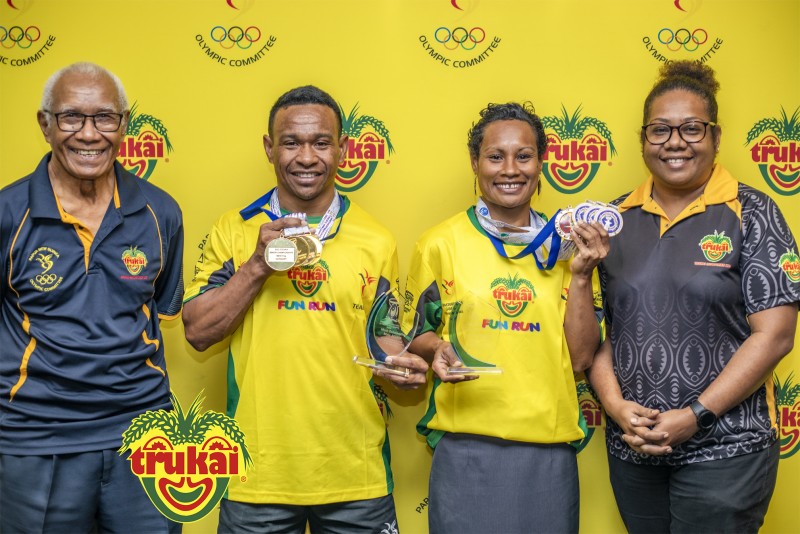 Trukai Industries Limited is proud to support Dika Toua and Morea Baru in their recent successful campaign at the 2022 Pacific Mini Games in the Northern Marianas Islands.

Both Trukai Brand Ambassadors performed exceptionally well with Dika taking home 3 gold medals in the 49kg division and Morea bagging another 3 in the 61kg division.

Trukai Industries’ Marketing Manager, Maryanne Tom says that the company stands by the great talent that is evident with Dika Toua and Morea Baru.

“We celebrate their achievements knowing that their ongoing success is the drive behind the advancement of the weightlifting code in the country.”

Trukai Industries has supported the weightlifting sporting code through the PNG Weightlifting Federation for 23 years and as part of the athlete incentive, both Dika and Morea will be paid cash incentives for their medal wins at the recent Mini Pacific Games.

The Athlete incentive program was created in 2014 as a great way to motivate our teams to perform at their best at international competitions. At different tournaments, an incentive in kina value is awarded to the individual based on their results. The incentive is only awarded if they win a gold, silver or bronze medal.

Both Dika and Morea expressed thanks to Trukai for their continued support and were motivated to maintain their successful momentum in flying the PNG Flag.

Dika says that for her, this was more than a passion but a profession that she has given her time and effort to maintain. She also encouraged others to step up and make the most of opportunities given to them. “If I can do it so can you”.

Morea Baru was encouraged to see how far the company has supported him and Dika and says that he is happy to be flying the PNG flag as a result of it.

PNG Weightlifting Federation President, Sir John Dawanincura stated “Weightlifting has done it again for PNG. We are proud of the achievements of all our Team PNG weightlifters at the 11th edition of the Pacific Mini Games in 2022, in Saipan, and profoundly proud of our elite Athletes’ performances in Morea Baru and Dika Toua”.   These two athletes were awarded best male and best female athlete of the Games, by the Pacific Games Council, at the closing ceremony.

We were very pleased to see our new young athletes compete and collect a bag of medals also in both the Mini Pacific Games and Oceania Championships that were run concurrently.

We thank Trukai Industries Limited for their continued effort to support the PNG Weightlifting Federation and our Athletes in their sporting journey and sporting pursuit of success over the years, and into the future with the additional commitment of support presented today”.

Trukai as the 2022 official sponsor of the PNG Weightlifting Federation is pleased of the achievements thus far and looks forward to building this partnership into the future.

The company would like to wish Dika and Morea a safe trip and successful campaign during their next stint at the 2022 Commonwealth Games Birmingham.