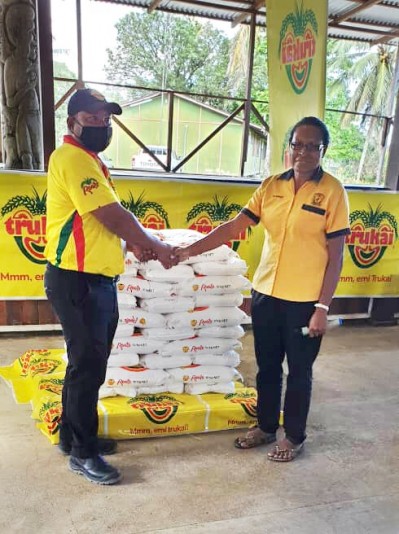 Trukai Industries Limited has given half a tonne of rice to the Cameron Secondary Food Appeal.

The Secondary school in Alotau reached out recently due to lack of funding from delayed subsidies affecting boarding schools.

According to the Appeal Coordinator, Magistrate Rebecca Kwayaila, the food appeal was launched when the school was forced to send their boarding students home.

Magistrate Kwayalia in her appeal letter stated that students from outer islands and other parts of the province who had no relatives remained on school grounds and were being supported by staff with basic meals.

Hence the appeal was to help feed the students until rations were made available.

Today, Trukai representatives were on ground at the Cameron Secondary school to hand over 50 Roots Medium grain 10kg bags in a show of support to the appeal.

Trukai Industries Marketing Manager, Maryanne Tom, said that the company felt obligated to step up and help the students who were in need.

“We at Trukai believe in being part of the community and go out of our way to help where we can.

“These students represent the future of our nation, and it would be a shame to see them in need when we can help give a helping hand to facilitate for their wellbeing”.

Meanwhile, Magistrate Kwayalia and her committee have created a WhatsApp group as well as posted on Facebook calling for donations for cash or kind. Interested Organisations or individuals can reach the Magistrate on 72839954.