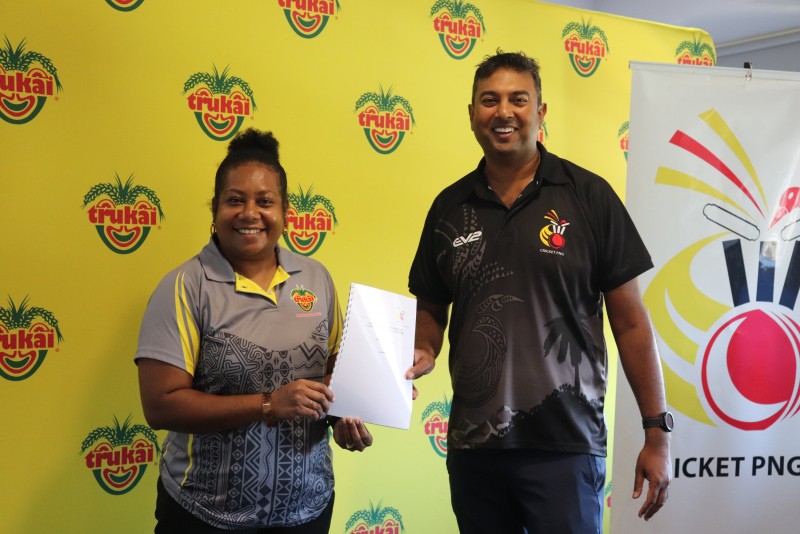 Trukai Industries Limited has once again has demonstrated its support for sports in PNG by signing up as the naming rights sponsor of the Trukai Village Premiere League (VPL) Tournament.

“The Village Premiere League although in its second year, is growing in popularity and has followers both domestic and international. This year through our sponsorship we have increased the first prize cash money from K10,000 to K20,000. So this will make it even more exciting for the teams participating,” said Mrs. Tom.

She reiterated stating, “This sponsorship also means that we are now a part of the family of sponsors for Cricket PNG and we are excited about partnering in the Cricket Development Program for school aged children nationwide.”

“Our values at Trukai are community, family, healthy living and healthy eating and so this partnership is a great marriage of our brands,” said Mrs. Tom.

“Cricket PNG is about sports and wellbeing and Trukai is about nutrition and health and wellbeing; and with our shared beliefs we want to bring out the message that cricket is the sport for everyone,” said Naidu.

Both Trukai Industries and Cricket PNG are already in talks discussing how this partnership can impact the lives of people around the country through Cricket PNG’s development programs.

This year there will be two Village Premiere Leagues Tournaments played at the Amini Park in May and November.

There are six teams that have registered for the May tournament that will be held on Sunday May 8th and 15th, they include Panamex PNG, Zara Wanderers, Spirit of Rigo, Koita Warriors, Northern Alexandrias and Fairprice Furniture.

This Friday April 8th these teams will participate in a Player Draft to select 13 players for their squad at the Hilton Hotel. The first ever of its kind in PNG.

“The VPL is a competition based on skill that is why we will host an auction with each team bidding on their players,” said Naidu.

As naming rights sponsors of the VPL, Trukai will support the tournament through the monetary value of the prizes and support the development programs of Cricket PNG with sponsorship in kind.

Apart from this sponsorship Trukai Industries is also well known to support sporting codes such as weightlifting, rugby league and its flagship sponsorship of Team PNG through the Trukai Fun Run.