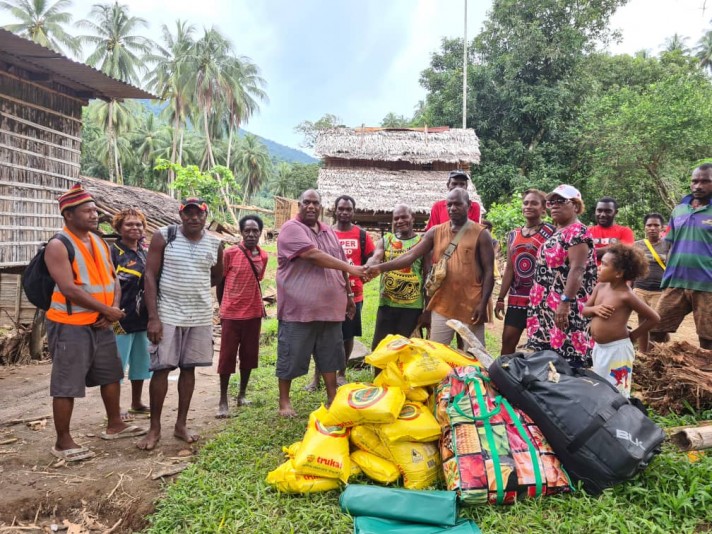 Bagum villagers of the Ward 9 area in Talasea were assisted by Trukai Industries after damages caused by flash flooding and landslides were experienced in the area. This was due to continuous heavy rain which had seen houses and food gardens destroyed.

On Thursday January 20th the people of Bagum, Sihuru and Harongo were left disarray from fallen rocks, swept down logs and debris from the mountain.

Trukai Industries as part of its Corporate Social Responsibility Program donated 300 kilograms of rice to the affected villages.

The donation was handed to the affected villages by Dominic Kaumu, a community representative.

The villagers were very thankful to have received the donations as it was timely and demonstrated Trukai’s commitment to supporting local communities.

The donation was presented at Sihuru village and was witnessed by the Kimbe Red Cross team who were present to assist the affected villagers.

Speaking on behalf of the community, village elder Eddie Lutu thanked Trukai Industries and community representative Dominic Kaumu for seeking the support on their behalf.

Meanwhile, Trukai’s Public Relations Manager, Andrea Tagamasau said that the company when approached wanted to help as it was a way for them to reach out to these families in need.

“We are more than just a rice company, Trukai’s commitment to the people of PNG is evident as we continue to help those in times of need”.

This donation that Trukai has made will provide some much needed food source to the people in need while they try their best to sort themselves during this difficult time.